Back to BlogsNext up: Is there a light at the end of the tunnel when it comes to planning for the Future of Work?

The decade after the pandemic

At the time of writing, the world is just beginning to emerge from the COVID-19 global pandemic. The conservative estimate of total global cases exceeds 140 million. Three million deaths are directly attributable to COVID-19 [1], mostly during 2020. Every country in the world has been deeply impacted by the pandemic, and responses have varied from simple social distancing and masks to prohibitive lockdown measures designed to keep citizens in isolation in their homes. Many businesses effectively shut down to prevent contagion. The lenders of last resort, the governments of the world, have stepped in to prop up their economies by paying salaries for displaced workers, effectively carrying the economy during the most severe lockdowns. As a result, the impacts on public finances are severe and will be felt for generations.

Nine vaccines are presently authorised and in global circulation, developed by pharmaceutical companies including Pfizer, Moderna and Bharat as well as government agencies. Authorisation and rollouts across the world are accelerating, with countries like the US and the UK [2] leading the way in vaccinations for their citizens.

The expectation is that lockdowns will ease in the coming three to six months, as vaccinations pave the way for herd immunity. Dangers still remain with the potential for new strains of COVID-19 [3]. There's a bifurcating view of the race between the efficacy of vaccines and mutations of new strains. One view believes that the world will begin to return to normality by the third quarter of 2021, easing back into certain travel patterns, and opening up businesses across a range of industries impacted by shutdowns. The other view suggests that the new strains will outpace vaccine developments, leading to a long and drawn-out period of lockdowns and releases.

No matter which scenario takes precedence, the world emerges from COVID-19 in a very different shape to what it was previously, and the impacts will likely be felt for the next decade. A swift and inclusive emergence from the impacts of COVID-19 should be paramount for policymakers and industry leaders alike in the coming year.

Firstly, the enormous economic burden of a stalled economy has been largely borne through increased government debt, while furloughed workers were paid salaries through government support. The ratio of government debt to GDP is historically high, with many countries breaching 100%. This implies that interest rates that are already low and negative will likely stay that way for some time to come.

While governments stay indebted and running deficits, they'll be under enormous pressure to downsize their spending. This will likely involve embracing efficiencies and modern, digital transformation projects that will lead to a more empowered, efficient, but also likely smaller, aggregate workforce. The risks are that the credit rating of these governments will deteriorate and cause further difficulties in public financing and services. For some, this will lead to austerity, but for many others, it will require careful fiscal stimulus through industry and infrastructure spending programmes, such as that announced in the US for $2 trillion in infrastructure spending. 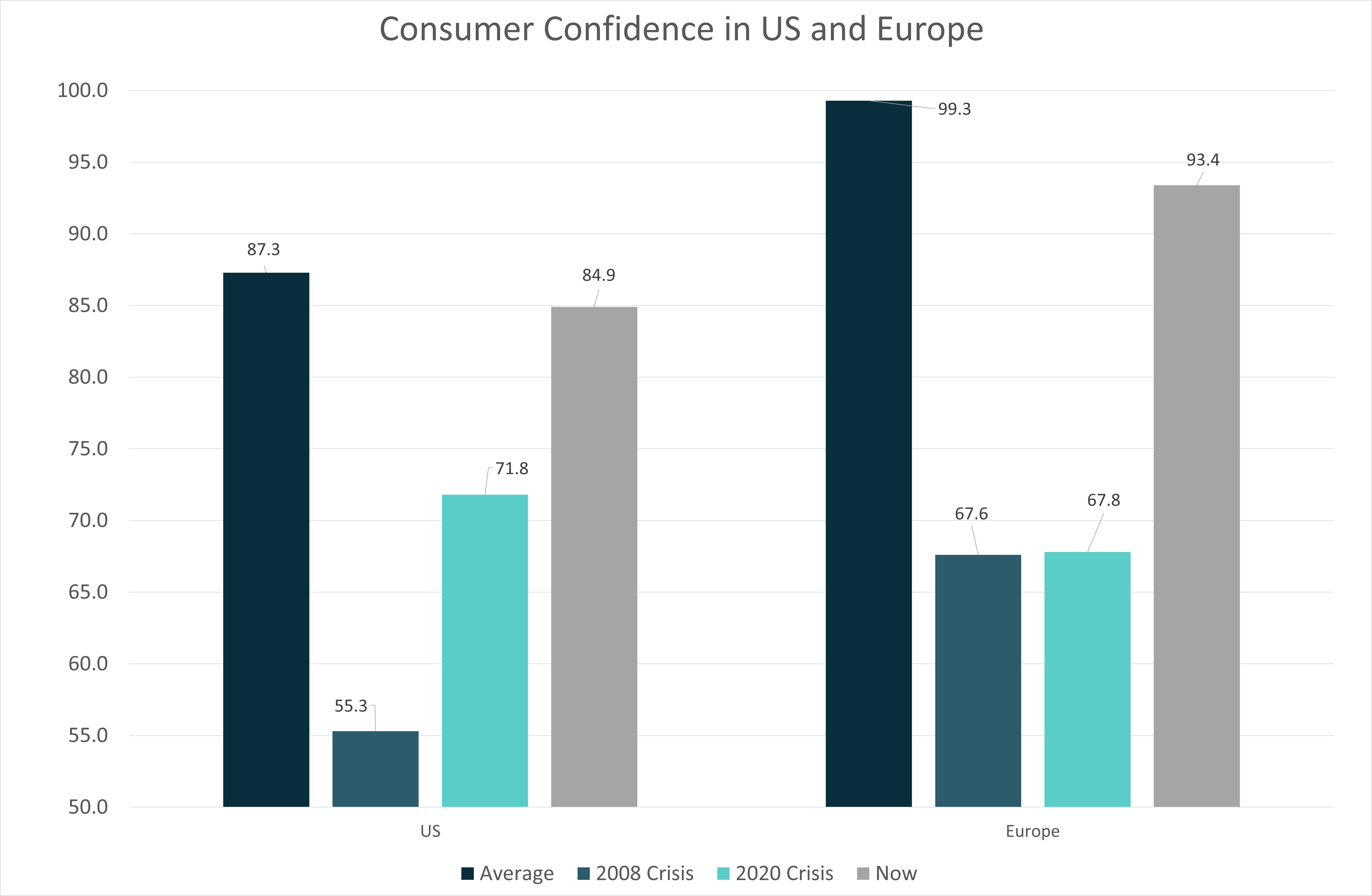 Finally, it was a very strong demonstration of government power in capital markets. When COVID-19 emerged, the government response was to shut down economic activity while guaranteeing wages for workers. This enabled many to stay employed while effectively not being part of the economy. In some cases, like Spain, this action was compared to the Universal Basic Income ideal, where governments paid the salaries for workers displaced by automation. However, the economic burden was clearly too great to maintain for any length of time.

Emerging from the bunker of COVID-19 lockdown, the global economy finds itself broken and scarred in multiple areas. [4] On a high note, the US corporates emerge perhaps strongest from COVID-19, being the big beneficiaries of both stimulus support [5], and the ability to transition their businesses online. Economies like Australia, the European Union and Great Britain have all benefitted from some government support, but their outcomes have been significantly worse than the US.

Both the US and Canada made deeper cuts to their employees, in anticipation of severe falls in revenue. Energy prices fell aggressively in the middle of 2020, resulting in deep staff cuts in Canadian energy companies. In 2021, as prices begin to reverse their fall and revenue expectations rise, companies are proving slower to rehire than they were to fire. Spain, on the other hand, has kept employees despite quite severe revenue falls during COVID-19, likely in support of social policies.

For energy and materials companies, the picture was mixed. While the direct impact on their employees was small, as mines are often remote places of work and much of their operations were not required to be shut down, the prices of commodities fluctuated enormously during the year, as expectations for recovery were driven by expectations of government actions.

The road from here

Two great uncertainties loom large for the decade post-COVID-19. While multiple vaccines have been developed, we continue to see mutations emerge, more recently from Brazil, the UK and India. These mutations will continue to challenge vaccines and will require us to innovate and evolve not only the vaccines but their effective rollouts as well. This could mean that for some regions of the world, the post-COVID-19 effects could linger for years, and probably for decades to come. This means further acceleration of technology adoption, to enable safer remote working and a general de-urbanisation which will see a continued move away from more densely populated areas.

From an industry perspective, the government response of both fiscal assistance through supportive interest rate policy, and additional investment in infrastructure, will be critical to set the tone for the ongoing recovery. For the workforces of the world, it will not be a comfortable journey. With technological innovation already moving at a record pace, industries will increasingly embrace new technologies to improve their operational efficiencies, making them more robust for future crises, as well as more profitable. This process will see the adoption of new ways of working, new business models, and require new skills to use the technologies that will increasingly come to dominate industries.

While it's easy to project a relatively calm rebuild period for the next ten years, it's also likely that the after-shocks of COVID-19 will continue for some years to come. Institutions and governments that are already on shaky ground will see significant damage and dislocation. The fiscal position of the European Union remains shaky, especially given the impact of COVID-19 on fragile economies like Italy and Spain, where unemployment is expected to stay high for a prolonged period.

The UK must go through an extended process of re-routing its trading relationships beyond the EU, which may be positive but will cause a significant re-alignment in industry and trade relations. The US is politically divided and faces another two election cycles over the next ten years that will continue to see the polarisation of the voting base with deep divisions in the social fabric of the population as the ongoing theme. The rise of China as an economic and political force will continue to shape global geopolitics and will create volatility in global supply chains, trade and economic development globally. The global movement towards carbon reduction in terms of investment flows, and the development of alternative energy, will shift increasing capital away toward new industries, leaving behind significant stranded assets and workforces which will require government intervention and a period of just transition.

While each decade has its own share of uncertainty, the post-COVID-19 decade coincides not only with an uncertain recovery from the ravages of a global pandemic, but seismic shifts in the landscape of technology adoption, industry structure and geopolitical relations.

[3] The Coronavirus Is Mutating: What to Know About New Variants

[4] 6 million small businesses, representing 16 million jobs surveyed believe that they would not survive the financial pressures of COVID-19 in the UK (The Guardian, Oct 2020).

[5] The graphs show the corporate revenue expectations of the largest companies across these regions. Equally, the valuation multiples of earnings have been expanding across these markets as expected government stimulus and lower interest rates inflate prices.